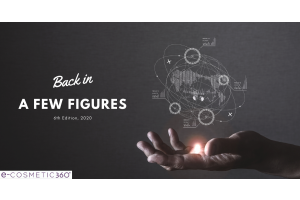 Cosmetic 360, the international trade fair for innovation in the Fragrance and Cosmetics industry, was held in an exclusively digital edition on October 12 and 13: e-COSMETIC 360.

e-COSMETIC 360 was the first milestone of the Cosmetic Revival Week, which was followed by the Estates General of cosmetics on October 15, 2020.

A fully successful 4.0 meeting: AI, webinars, chats, videos, e-totems, based on a rich and intuitive digital platform, were there to stimulate and increase interactions between players located throughout the world.

e-COSMETIC 360 was one of the few trade fair to be held fully digital in 2020. Cosmetic Valley competitiveness cluster - organizer of the event - has kept its DNA of creation and collective emulation, by adding the added value of digital.

The show expects to return in 2021 in Carrousel du Louvre, on October 13 and 14. Registrations are already open : contact@cosmetic-360.com